A Two Week Break From Our Toddler – The Verdict 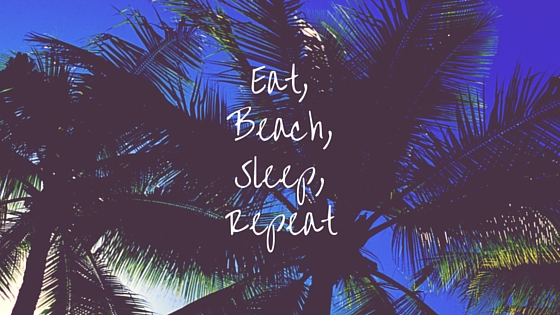 I just thought I’d do a little post on this as a few people were asking how it was. It was obviously amazing…but there were peaks and troughs of feelings throughout and an annoying inability to completely relax.

For those who don’t know, Ross and I have just come back from two child free weeks in Bali – sorry to keep barking on about it I don’t mean to rub it in – but it did feel like a dream come true because when you are in the midst of food throwing, “NO!” shouting, tantrum screaming chaos, you can’t even imagine what it would be like to have a break.  The irony is that this is when you need a break the most.

We were lucky to get two weeks off on a few accounts – my lovely mum firstly agreeing to have T-Rex for the whole two weeks, yes that’s agreeing to have fourteen nights of interrupted sleep, fourteen mornings of five am wake up calls and fourteen days of a high energy toddler with ants in his pants who expects you to chase him for 12 hours of the day…yes we were LUCKY!  We were also lucky to be given the chance to go to Bali and it felt like an opportunity that we couldn’t turn down.

When we first found out we were going I was so ridiculously excited – our first proper holiday without T-Rex – ‘Eat, Beach, Sleep Repeat’ was all I wanted to do.  Then, as the trip got closer my mind started going a bit crazy, “what if he gets ill?” “what if he thinks we have deserted him?” “are we mega selfish parents?” I had visions of getting to Bali and then within two days having to fly back because T-Rex had had an awful accident and was in hospital…my mind went into overdrive but I guess this is normal or else I’d be a heartless mum.  We did Skype T-Rex from different rooms at home though to get him used to seeing us on screen…is that a bit strange?

To cut it short, the first week I was fine but by the second week I was cooing over babies in the street (I am not a hugely maternal person so this is strange behaviour) and voluntarily talking to mums and dads with kids by the pool (er hello Abbie have a word with yourself!) but it’s strange when you are on your own, you just get on with your own thing – no one stops you to tell you how sweet your kid is, no one strikes up a conversation with you because you have a child – I didn’t dislike it but it just felt really different.

Two weeks was a good length of time to recharge but I was ready to come home by then, I did miss T-Rex and it was breaking my heart that every time we skyped he kissed and hugged the phone…arrgh guilt, guilt guilt! Unfortunately due to the pesky Volcanos in Bali I was delayed for a few days longer and the uncertainty of not knowing when I’d be able to leave the island was really hard on the old emotions (more guilt)…after spending hours on phones and websites trying to unsuccessfully change flights, buy new ones etc, I gave up and joined another stranded girl for lunch – we ended up getting blind drunk (five bottles of wine between us) and do you know what it was such a laugh and something I would never have been able to do if T-Rex had been there (bonus holiday delays!)

When I did finally get home I expected a cold reception from T-Rex, I thought he might want to punish me for being away but he was the total opposite and just wanted to kiss and hug me (more GUILT!). Oh and that didn’t last long by the way, he was soon back to his tantruming toddler self within 24 hours. It didn’t seem to affect his behaviour towards me at all though – I was expecting a total revolt! I think he realised I was away but I’m not sure he was aware of the length of time.

THE VERDICT from Ni Ni (Grandma)
“EXHAUSTING! Haha! No – it was truly lovely to have been able to spend such quality time with my grandson – it was a great experience and to be able to wake up every morning to hear his little voice say “hi Ni Ni” was adorable. I won’t deny that it was hard work mainly from the energy level point of view. We did go slightly off ‘the routine’ – there was probably a bit more chocolate, tv and dummy than normal but then, there had to be some leniency in order for me to cope! Would I do it again? Probably for ONE week, I think that would be just right for everybody …if pushed I WOULD do it for two weeks again though.”

Overall, it was amazing for Ross and I to have been able to spend time together in such a beautiful location and I do really think it did us some good to be romantic with each other the way we used to be before T-Rex. So if you can find a crazy person to look after your toddler for even a week then I’d recommend doing it because it’s refreshing and gives you the strength you need to take on your kid(s) again.