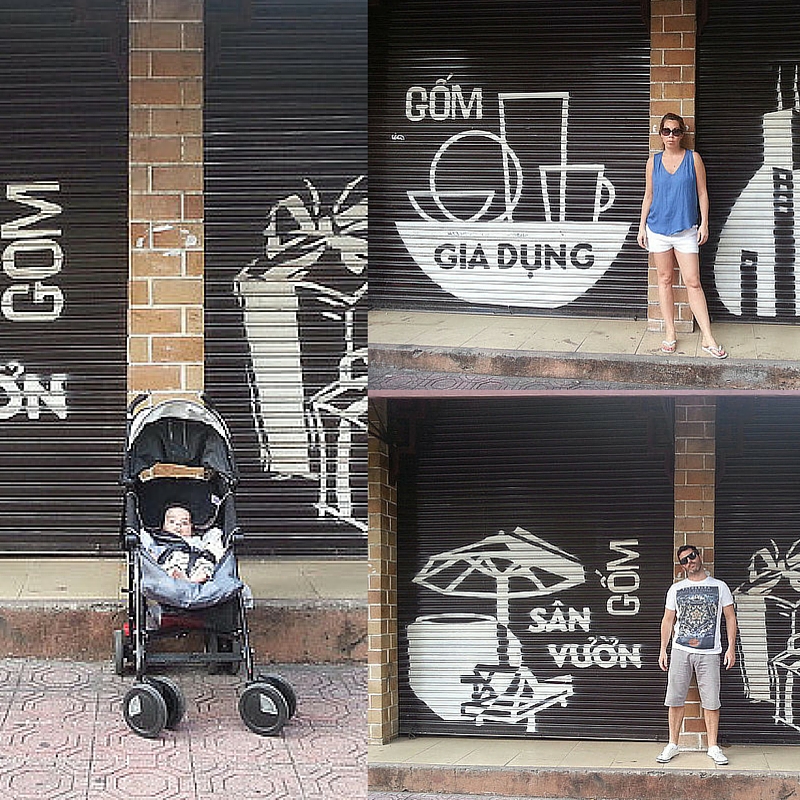 We took our three month old to Vietnam.  Sounds crazy but it was actually one of the easier holidays we had with our portable, non-moving, always sleeping, breast-feeding bean.  We visited Ho Chi Minh City during Tết – the Vietnamese new year.  Going to Vietnam during this time with a baby wasn’t a strategic move but it turned out to be hugely advantageous due to there being less people and therefore less pram vs people struggles on the streets. We stayed at the Liberty Central Hotel.  This hotel is fine – it’s not outstanding but a basic ’boutique’ hotel.  It was pleasant enough and I would probably stay again for a couple of nights.  It has a small pool and an acceptable buffet breakfast but we mainly chose it based on its central location and it was definitely very good for that. In my opinion, Ho Chi Minh City is a great place to take a baby.  When you have a newborn, you do a lot of walks (usually around your local park).  In this city, you can easily walk around thanks to the wide and shady boulevard style pavements – there is a lot of space here for pram walking, especially as you move further towards the French quarter.  There are, of course, the busier market streets which take a bit of negotiation but it’s nothing you can’t handle.

How to cross the road in Vietnam with a pram: In stark contradiction to the easy pavements, crossing the road in Vietnam is an art unto itself. I did have several near heart attacks during our week of Vietnamese road crossing but this is how to do it.  When you decide to step off that pavement with the pram – make the decision with confidence, don’t hesitate, just go with strength and determination.  If you don’t take on this attitude you will be stuck on the pavement forever because there are a zillion motorbikes in Ho Chi Minh City.  This technique works because, although the sea of mopeds are quite possibly the scariest thing you’ll encounter here, you’ll find that they will actually dance to your tune and just gracefully veer around you – it is like an unsaid rule between drivers and pedestrians. Nobody stop, everyone just go and we’ll work with it.

L’Usine is a cafeteria and shop

Once you have mastered the road crossing you can reward yourself in one of the many excellent coffee houses of Ho Chi Minh.  Tired parents, this city is a coffee haven with varieties from all over the world – they take their coffee seriously.  More interesting is the Vietnamese coffee ca phe sua da – literally “coffee, milk, ice”. It’s sweeter than a normal coffee because they use condensed milk but it’s refreshing and it suits the humid climate much better than a standard hot coffee. When you have walked the streets which are an eclectic mix of modern skyscrapers, French colonial architecture and traditional Vietnamese market sellers, you can walk around the museums.  We went to two; The Ho Chi Minh City Museum and The Reunification Palace.  The former is a simple but interesting read about the war in Vietnam with a few iconic tanks and helicopters on display.  The latter is a world of opulent retro interiors and an insight into the city’s 1960’s political grandeur.

Last but not least in Vietnam is the food and most importantly, the Pho.  If you have never had Pho, it is basically a broth with noodles and meat, usually beef.  It is one of my favourite dishes and is, naturally, sold everywhere here. We ate it on the street and in a Pho restaurant chain and they were both equally as good as each other, although, and I hate to say this, the Vietnamese Pho offerings in London have been perfected and are a lot herbier and tastier than the traditional versions we tried in Ho Chi Minh City.

Other things to do in Ho Chi Minh City:

Shop: Boutique shops such as L’Usine are in Dong Khoi and District 1.  If you like Vietnamese propaganda posters then you can look and buy at these galleries: Lotus (25 Dong Khoi street) and Dogma (43 Ton That Thiep).

Eat: The Refinery Courtyard – this is a really cool little courtyard of trendy restaurants including The Refinery, Hoa Tuc and Blanchy Street.  If you’ve eaten too much Pho and want a change Blanchy Street is run by an ex-Nobu chef – it is Japanese food and it is absolutely amazing (expensive for Vietnam but not for UK).  As with most places in Asia, all the restaurants are very child friendly and staff very welcoming.

Visit: Củ Chi tunnels if you have older children interested in history then this network of tunnels are symbolic of the tenacious spirit of the Vietnamese.  Used by Viet Cong soldiers as hiding spots during combat, as well as being communication and supply routes for hospitals, food and weapon caches and living quarters for numerous North Vietnamese fighters.

Baby & Kids Play Zones: There is a list here on the blog Hello Saigon that I found.  We didn’t go to any of these because T-Rex was too small – I also have an aversion to soft play but I know sometimes it’s necessary and in many cases can be a life saver.

Baby Supplies: If you are not breastfeeding they sell formula in all the supermarkets.  The formulas are obviously different brands but you can sort of make out what is what.  I came to the conclusion with the formula that whilst I might be militant with what I fed T-Rex at home, I had to be flexible abroad – if he drank it I was happy.  There are baby supply shops – a list is here: Angloinfo.com

Vaccinations:  Surprisingly, T-Rex didn’t need any extra vaccinations before we went to Vietnam – the GP told me that the standard baby jabs he was already having were sufficient but I would always check before you go because things can change.

Photo By: Copyright Bikinis and Bibs